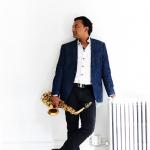 Rudresh Mahanthappa’s Indo-Pak Coalition has been hailed by The New York Times as “a trio equally grounded in folk tradition and jazz improvisation, propos[ing] a social pact as well as a musical ideal.” The ensemble’s three formidable talents — Mahanthappa on alto saxophone, Rez Abbasi on guitar, and Dan Weiss on tabla — first documented their group conception in 2008 with Apti, which won praise from The Guardian for its “irresistible urgency.” Agrima, the long-awaited follow-up, finds Mahanthappa and the group expanding aesthetic horizons: adding a modified drum set, incorporating effects and electronics, and working with a broader audio canvas overall.  The core of the band’s sound, the vibrant presence of Indian rhythmic and melodic elements in a charged, modern improvisational framework born of the New York jazz scene, remains firmly in place.

According to Mahanthappa, “Agrima” in Sanskrit simply means “next” or “following.” It comes at a propitious time for all three members: Mahanthappa has enjoyed great success with his Bird Calls quintet and recently became Director of Jazz Studies at Princeton University. Abbasi, born in Karachi, Pakistan and raised in California, has revealed a rare mastery of guitar in a range of settings including his own RAAQ acoustic quartet and his heavily electric project, Junction. Weiss, a voraciously eclectic drummer with interests ranging from classical tabla performance to metal, has garnered acclaim for his work ranging from solo drums to trio to large ensemble.

From all three instruments we hear a heightening of expressive nuance and possibility. Mahanthappa’s alto is transformed in places by software-driven effects to create strange processed timbres, echoes, decays and soundscapes.

In January 2017 the Indo-Pak Coalition premiered the new set of music that would become Agrima at globalFEST in New York. The energy of that encounter carried forward into the studio, from the eerie rubato incantation of “Alap” to the spiky lines and bracing tempo of “Snap,” from the looping synthesized patterns, fractured beats and sunny temperament of “Agrima” to the simpler, moodier medium groove of “Showcase.” The band is in peak form, executing tough thematic material, attending to fine dynamic contrasts, shifting tempos with spellbinding ease, and of course improvising with depth and ferocity.