Noel Nights: Martha and Rufus Wainwright and Family and Friends 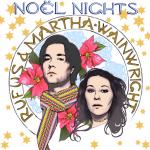 Noel Nights: Martha and Rufus Wainwright and Family and Friends

The legendary Rufus Wainwright and Martha Wainwright’s Christmas show, “Noel Nights,” is back in New York City! Featuring three generations of the Wainwright and McGarrigle families along with many special guests, the show has previously been presented in Montreal, New York, Los Angeles, San Francisco and Nashville.

This year, after a 4 year hiatus, the show is returning to New York City on Dec. 16 at Town Hall. The show features not only Martha and Rufus plus performances by Sufjan Stevens, and Joan As Policewoman alongside regulars Emmylou Harris, Loudon Wainwright III, Teddy Thompson, Sloan Wainwright, and Lucy Wainwright Roche.

Described by The New York Times as “typical Christmas-time family gathering motley, convivial, multi-generational, jokey, affectionate and tinged with both skepticism and faith,” the Christmas show has been a family tradition since 2005 when Kate and Anna McGarrigle released their classic album, “The McGarrigle Christmas Hour.”

Part concert and part family reunion the show was inspired by Kate McGarrigle, Rufus and Martha’s late mother, who passed in 2010 from sarcoma. Proceeds from this show benefit Stand Up to Cancer, which has named Martha and Rufus as Ambassadors to their organization.