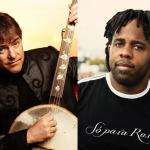 With 20 Grammy Awards between them, this banjo and bass combination has been heard world-wide as part of Béla Fleck and the Flecktones. In this special intimate concert, these two mind-blowing musicians explore the sounds of "blu-bop"and modern American roots music like never before.

Part of Symphony Space's Project Americana, an exploration of America's rich cultural heritage through its art, music, and literature.

With 20 Grammy Awards between them, this banjo and bass combination has been heard world-wide as part of Béla Fleck and the Flecktones. In this special intimate concert, these two mind-blowing musicians explore the sounds of “blu-bop” and modern American roots music like never before.

Just in case you aren’t familiar with Béla Fleck, there are some who say he’s the premier banjo player in the world. Others claim that Béla has virtually reinvented the image and the sound of the banjo through a remarkable performing and recording career that has taken him all over the musical map and on a range of solo projects and collaborations. If you are familiar with Béla, you know that he just loves to play the banjo and put it into unique settings.

The 16-time Grammy Award winner has been nominated in more categories than any other artist in Grammy history and remains a powerfully creative force globally in bluegrass, jazz, classical pop, rock, and world beat.  In 2009, he produced the award-winning documentary and recordings, Throw Down Your Heart, where he journeyed across Africa to research the origins of the banjo.  In 2011, Fleck premiered The Impostor with the Nashville Symphony Orchestra, an unprecedented banjo concerto, followed by the companion documentary, How to Write a Banjo Concerto. In 2016, Béla will unveil his second concerto Juno in Canton, Ohio.

These days, Fleck bounces between various intriguing touring situations: he performs his concerto worldwide with symphonies, collaborates in a duo with Chick Corea and in a trio with Zakir Hussain and Edgar Meyer. He performs in concert with the Brooklyn Rider string quartet, in banjo duet with Abigail Washburn, and back to bluegrass with his old friends Sam Bush, Jerry Douglas, Stuart Duncan, Bryan Sutton, and others.  He collaborates with African artists such as Oumou Sangare and Toumani Diabate, in a jazz setting with The Marcus Roberts Trio, and with Béla Fleck and the Flecktones, who continue to perform together 25 years after the band’s inception. belafleck.com